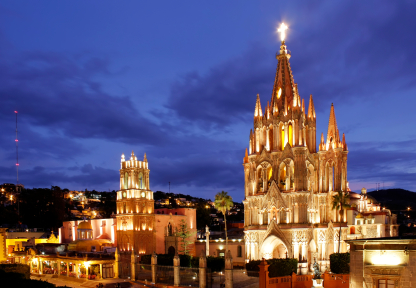 Read this to me!

This cosmopolitan capital city has been a major settlement for more than 2,000 years, and is famous today as much for fog as for its ubiquitous black taxi cabs.

With a current population of 7.5 million plus, it is not surprising that over 300 different languages are spoken among its peoples. The city is home to both the world’s oldest underground rail system (second in size only to the Shanghai Metro) and the Greenwich Meridian (0° longitude).

Have you noted we’re describing London and not San Miguel? We just wanted to add entertainment value to your reading experience <grins>

Let’s start again, shall we?

With friendly people, cobblestone streets, colonial architecture and a plethora of traditional customs still observed, San Miguel de Allende maintains a flavor of México that is now difficult to find outside of imagination and nostalgia.

Located approximately 300 kilometers northwest of Mexico City, San Miguel was founded in the 16th century and named a UNESCO World Heritage Site in 2008.

As with most subjects, extensive factual data can be found within the San Miguel de Allende Wikipedia article.

San Miguel’s exact location can be viewed at Google Maps, and thanks to Google’s Street View, you can take a Virtual Tour of the city from the comfort of your computer screen.

On September 3, 2011, ProjectHola! volunteers will fan out from San Miguel’s main plaza distributing 3,000 name tags in their wake. By early evening, we hope that every individual in downtown will be sporting a name tag and spreading good cheer.

Photographs and videos of the day’s activities will be taken and subsequently shared on this very web page.

If you’ll be in or near San Miguel on September 3rd and would like to distribute name tags with us, please let us know. We’ll be very happy to have you join the party!