An Email from Dad 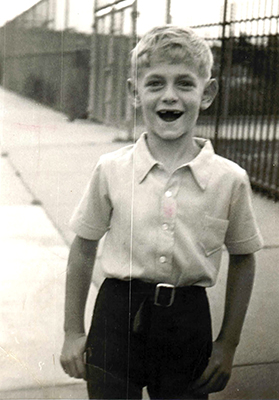 Read this to me!

I’ve said this elsewhere, but it bears repeating:
One hallmark of a great parent is his or her willingness to be supportive of the many roads down which a child – of any age – wishes to venture.

Throughout my forty-plus years and down more paths than I care to confess, I have been blessed with the world’s most encouraging father: Ragnar

He never ceases to surprise me. When he does, the picture which accompanies this text flashes against the big screen of my mind. It is a photo of my father, age 7, taken in Jackson Heights, New York, in 1941. I like this image because it reminds me to see the world with a sense of wonder, joy and excitement. I don’t always live up to those standards, but it’s difficult to forget them when looking at this happy young lad.

My father doesn’t tweet. My father doesn’t facebook. He does, however, email with abandon and sent me a quick note the other day saying, “I’ve been thinking. I’d like to make a sign offering free name tags and sit outside the grocery store on September 3rd.”

To say I smiled would, of course, be an understatement. I was very touched. His email even included an attachment of the sign he created and plans to use. The Internet may be the go-to place for much of today’s social interaction, but my father has reminded me that it’s not the only option.

Reading his email, the picture of my father as a go-getting seven year old came instantly to my mind. He hasn’t changed. He’s taller, sure, and certainly wiser. Perhaps his skin is not as smooth as in his youth. But his heart is as big as ever and his love of adventure has by no means diminished.

On September 3rd, while I’m passing out name tags in San Miguel, I’ll be thinking about my father’s picture. I hope to have his look upon my face and his joy inside my heart.

Thanks, Dad. For everything!

This entry was posted in Uncategorized. Bookmark the permalink.

One Response to An Email from Dad