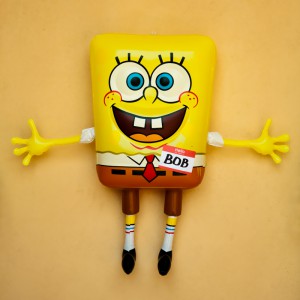 But you can call me Bob.

I arrived at the main plaza promptly at 3:00pm carrying my box of name tags, markers and a sign in both Spanish and English advertising Free Name Tags. A few people had mentioned they might volunteer to distribute name tags, so I walked the perimeter of the plaza looking both for familiar faces and a place to set up shop.

I found a nice spot at the end of a park bench and sat myself down. There were plenty of people around; children, teenagers, parents, grandparents. The usual group of well behaved boys was practicing their break-dance moves in the gazebo. At every corner of the plaza was a shoeshine stand, each with its established crowd of regulars – no one actually getting a shine but everyone with something to say. A group of mariachis was entertaining at a table outside a restaurant somewhere behind me.

The main plaza in San Miguel is a popular place to see and be seen, to meander and to dawdle, to buy cotton candy or a hot dog. If you sit there long enough, everyone in town will eventually pass by.

But even in the midst of all the activity, I was alone. I took heart in the knowledge that very soon, everyone in the plaza would know me – or at least be talking about me =)

I applied my name tag to my shirt, put out the Free Name Tags sign, grabbed a marker and started making name tags. I started with “A” and made my way through the alphabet writing out the first name that came to mind. My first “customer” was a boy about eight years of age. He had been nearby playing with a balloon by blowing it up and then letting it fly. Eventually, it landed high in the tree above my head. I saw him evaluate the situation, nose pointing to the sky. His proposed solution was to shake the tree and allow gravity to rescue the balloon. A bright idea. It may have worked, too, had the tree not been one hundred-plus years old with a trunk so thick it had long since stopped paying heed to eight year olds.

The tree was, however, only about a yard from where I sat. The boy quickly realized that his plan had failed but then became interested in what I was doing – looking over my shoulder. I asked his name and he said, “Daniel.” In the cleanest block letters I could muster, I scrawled DANIEL across a name tag and presented it to him. I showed him my name tag so that he would know what to do with his. I told him it was nice to meet him. He thanked me and ran to his nearby parents to proudly show off his name tag. The parents waved to me. I waved back.

Passing in front of me was the balloon seller. In addition to balloons, he sells pinwheels, kick balls and air-filled cartoon characters. He carries his entire inventory – everything already inflated – on a long pole balanced on his shoulder and simply walks around the plaza hoping for a sale.

It was impossible not to see Sponge Bob Square Pants hanging from a string near the far end of the seller’s pole. I chuckled because the first thing that came to my mind was, “Hello, my name is Bob.” But then it hit me – Sponge Bob could help me with the name tag distribution!

I imagine it’s no news to any parent of a cartoon-watching-age child, but Sponge Bob is a child magnet! No child could pass Sponge Bob without wanting a closer look. Those children with any level of ambulatory skill made bee-lines to Bob. Those being carried or in strollers demanded a detour. I can’t imagine how the balloon seller survives walking alone and unarmed in the plaza. Perhaps the sheer bulk of his inventory lessens the appeal. But put Sponge Bob on a bench by himself and he’s the hit of the party.

Without exception, every child that came to visit Bob also wanted a name tag. I offered name tags to any and all adults accompanying (or chasing) the kids, but there were only a few takers. Apparently, adults feel a bit self-conscious about wearing name tags while children wear them with great self-confidence. This may add credence to my theory that we are not born with our invisible walls but rather that we build them ourselves little by little.

Children twelve and under were not my targeted demographic, but their enthusiasm to participate and brazen delight at parading around with name tags made them all my little Heroes du Jour. Each of us could learn something about friendliness, joy and trust from children.

This entry was posted in Uncategorized. Bookmark the permalink.